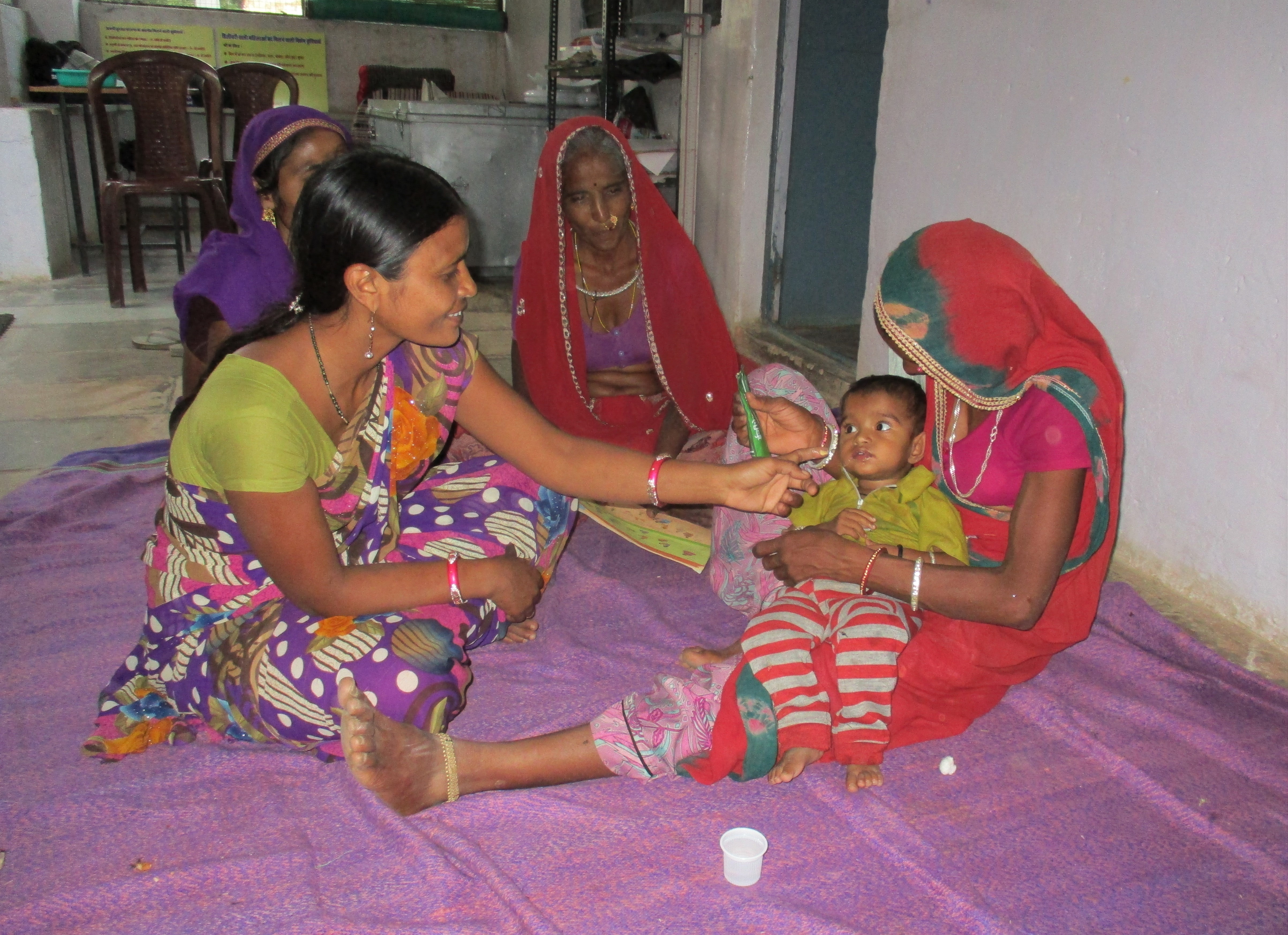 The beautiful countryside of Southern Rajasthan belies a well-kept secret: over half of the adult and child population is malnourished. In the areas where Basic Health Services provides AMRIT health clinics offering high-quality, low-cost healthcare, child malnutrition is a problem of epic proportions. In our study of Salumbar block of Udaipur district, every two in five children is stunted and families survive on one roti a day. [1] A lack of locally available, nutrient-rich foods, inappropriate feeding practices, combined with reliance on traditional healers makes it challenging for families to break free from the cycle of poor health and nutrition.

Ashok was born just 2 kilograms, and he failed to gain weight for several months. Ashok’s parents tried several routes to help their baby gain weight. They took him to a private clinic in Udaipur city, around 100 kms away from their home, and to a practitioner in Pratapgad, the adjoining district. They sought out the guidance of a Bhopa (priest) to cure their son of a spirit inside him, which was not allowing him to grow.  None of these interventions produced results, despite an overall investment of 30,000: Ashok was still weak and failing to gain weight.

When Ashok’s parents took him to the AMRIT clinic at Manpur, he was ten months old, but just 2.5 kilograms. He should have weighed 7 to 9 kilograms. Ashok’s father said:  “When we took Ashok to the clinic we were holding onto that last strand of hope. We could see our child was not growing like the other children his age. He wasn’t as active as them and cried all day.”

But food on its own is not enough to ensure positive nutrition habits throughout the lifetime of a child. The AMRIT team conducted ongoing counseling with Ashok’s parents to ensure they understood what a balanced, healthy diet meant in practice. His mother Ramila says, “I did not know a child after 6 months could be given complimentary foods. After I visited AMRIT clinic the nurse suggested I feed my child rice, roti, dals (lentils), and vegetables which I started feeding him since then. I could see the difference of the treatment within ten days. He was gaining 200-300 grams every week.”

Ashok was kept on RUTF for a month after which he was recommended energy-rich foods easily available at his house. On the nurses’ advice they included vegetables and fruits often in their diet. There was a drastic change in his temperament and activities. His family members noticed he had become less irritable and more playful than he used to be.

Today four months on from his first visit, there is a significant change in his health, appearance, and activity levels, although he is still on the road to complete recovery. Ramila brings him to the clinic every week for an assessment. He has gained over 3 kilograms and continues to show improvement in his weekly visits.

Ashok’s parents say, “We have only two children. All we do is all for them. But if their health suffers because we do not give them the care they deserve, what is the point of the money earned?”