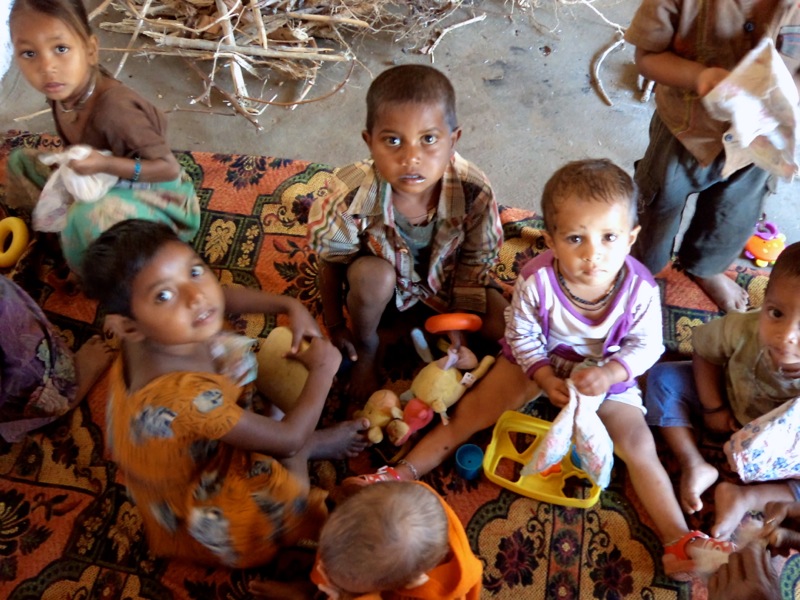 Kalia Phala is a remote hamlet in Manpur village, about 100 kilometers south of Udaipur city. Small landholdings and dependence on rains force many young men to migrate to Ahmedabad and other cities in Gujarat for their livelihoods.

Since most are poorly educated, they engage in manual, unskilled work. They migrate alone, leaving their wives, children, and elders behind. The burden of managing the house, tilling the farms, rearing cattle and looking after elders fall squarely on women’s shoulders, who themselves are young and have limited education. To supplement the meagre incomes of their husband, they additionally work on the NREGA sites.

Pushed into this drudgery early in life, they have limited time to engage with their children, play with them, or even feed them. Many a times, they have to leave their children behind when they go out of households to perform one of the many never ending chores Besides being denied the love and affection of their parents, and adequate nutrition, these children left alone at home are also at risk of sustaining injuries. No surprise then, that most children are malnourished, and many severely so.

Millions of young children worldwide are left alone, uncared for, unloved, and unfed when their mothers go out of their home to work in farms, factories, or construction sites. What children experience during these early years not only affects their physical growth and cognitive and social development potential, but also sets a critical foundation for their entire life-course. Children who grow up in adverse environments are likely to do poorly in school and subsequently as adults are likely to have low incomes, high fertility, and provide poor health care, nutrition, and stimulation to their own children, thus transmitting the disadvantage to next generation.

Kalia Phala is a remote hamlet in Manpur village, about 100 kilometers south of Udaipur city. Small landholdings and dependence on rains force many young men to migrate to Ahmedabad and other cities in Gujarat for their livelihoods.

Mothers leave their young children in the phulwaris in the morning, and then go off to work at households, farms, or construction sites, and pick them up in the evening. Some of them return in between to breastfeed their young ones or to help the créche workers provide cooked food, play with the children, put the children to sleep, and teach basic hygiene.

In last three months, the children in the créches have become playful and active, and appear much brighter than when they were enrolled.

This is how childhood is supposed to be, isn’t it? Most of the children have shown significant improvements in their weights. Happiness is visible on the faces of young mothers as well, as they bring their children. “My child is so much more active now…I also go for work without worrying about my child,” says Khanki Bai, mother of a young child. Another phulwari has been started here to enroll more flowers, and help them bloom. But there are many Kalia Phalas and many Khanki Bais across underprivileged populations in India. Some large scale operations such as that coordinated by Jan Swasthya Sahyog in tribal areas of Bilaspur district, and run by mobile crèches at construction sites across several cities of India, fulfill that need to some extent.

Heymann, summarising her report on childcare among poor working women around the world, exhorted the global community to act:

If children continue to be left home alone at young ages or without adult care and support for their health and education, the lives of too many will continue to be either riddled with acute tragedies or reduced by chronic neglect. But our children do not need to be left in inadequate care. As a global community, we have a choice.

Let us exercise that choice. Be a part of this movement.

2 thoughts on “Children, like flowers, bloom with care. Many languish without care.”